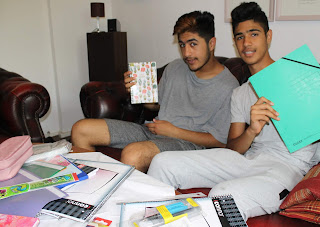 Yesterday I met The Bros to buy some things they need for school. The new term starts next Monday. We agreed to meet at Tierpark tram station for near there is a shopping centre in which one shop was selling a wide range of things for school at discount prices. 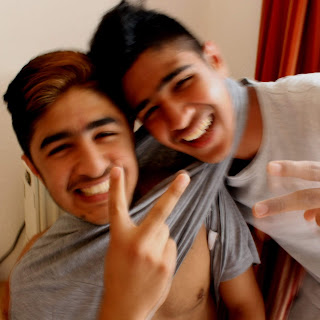 I got there early and waited, and waited. Then my mobile phone rang. It was Bro1 to say they were delayed due to work on the tram lines and they had to change to a bus. And so they arrived 30 minutes late. That was not all. Bro1 told me they had left the shopping list on the table at home! I told them to try to remember all on the list.

We went into the shop and found a number of parents with children also collecting pens, pencils, writing paper and other things for the new term. It took some time for The Boys to remember everything on their list but I think we got everything. Then to pay and all possible through a nice pair in Sydney. I told you about this in an earlier post.

Then they wanted to see a film at my place so bought food and drinks to enjoy as they watched the film. When we arrived at my place, Bro1 was sweating a lot so asked for a T-Shirt while his sweaty one recovered in the sun on my balcony! I gave him one and of course it was larger than his. Bro2 then started to laugh and made jokes that it was large enough for both of them. Then he stuck his head under the T-Shirt and proved his point. See the photo.

They watched the film and we agreed to meet tomorrow in Alex-Platz to go to a shop selling sports things they need for school. I hope they remember to bring their shopping list this time! Looking forward to seeing The Bros again and seeing them smile!