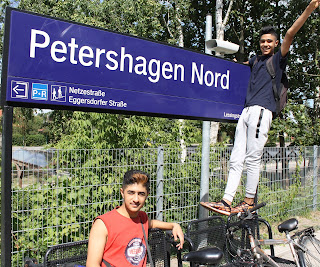 Phew, but yesterday was special. I miscalculated going on a cycling tour in 32°C with no food and little to drink. Big mistake. I met The Boys as agreed at 2.pm at a S-Bahn station. Starting so late was also a mistake but the boys wanted to sleep late. We left the train at station Petershagen as you can see from the photo.

I have been on this tour many times but never like yesterday. It was Sunday so many restaurants and cafes were closed also due to the heat. We cycled to the village of Eggersdorf. We stopped to read the public signs about the history of the place before riding through more woods to arrive at Bötzsee. This is all to the east of Berlin and on the way to Strausberg, where we went recently. 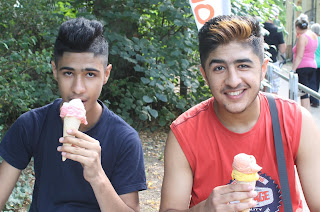 There were lots of people on the beach and at the large cafe. The Boys had ice cream (see photo) and I sat under a tree and sipped a cold beer! Off again to cycle up the western side of the lake. We had another stop and I gave them some good news. I reported earlier that they have to buy things for the next school term such as pens and paper as well as sports shoes/clothes. I said then that the problem was money.

A nice couple in Sydney, Australia read that and sent some money to my account. I told the boys and  Bro1 literally jumped for joy – see photo. Off again and that was perhaps a mistake. Given the distance and heat I should have turned back to the station. I didn’t and set off on the longer tour ending in Altlandsberg and then to Fredersdorf to catch a S-Bahn home. 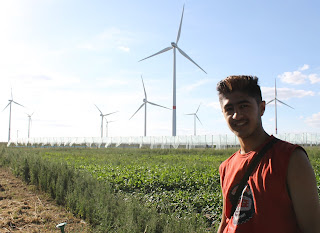 I got very tired and found it increasingly difficult to keep pushing the pedals. The Boys were very supportive and made sure we stopped regularly for breaks. The problem was that we had drunk all of our liquids. We finally arrived at the north of Altlandsberg. I stopped to ask a lady for details of the way to the station. Then I noticed blood soaking into the left leg of my jeans.

She saw it too and took me into her house where she gave me bandages and bottles of orange juice for all of us. What a nice generous lady. We set off again and finally arrived at the station, jumped into a S-Bahn. The boys left before me to cycle home and I arrived home later. The first thing I did was turn on the TV to watch Manchester play Bayern. The latter won the game.

As I relaxed into the game and a cold beer I reflected on the day and noted that given my age doing such a tour in such heat is no longer advisable. I think I shall be scaling down future cycling tours and making sure I have enough water plus take time to stop at a restaurant for a tasty meal. Learning for the future!