Had a visit from Daniel last Saturday afternoon. He had been on holiday in Crete along with other students supported by a scholarship foundation. It was great listening to him recalling his adventures there and which languages he had to use to communicate with local people. He admitted that of his five languages he had to use English most of the time! 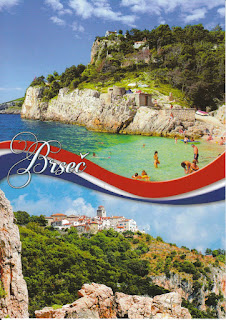 He looked very fit and healthy. I told him he should do some adverts as ‘Mr. Keep-Fit’. He just smiled. I think it was the idea of making some extra money! We talked about his plans to apply to study at a university, and his future English needs. He admitted he did not need English for his studies but thinks he will need it after he has graduated.

We agreed to focus on a Cambridge First Certificate Course when we meet again in September. He thinks it will look nice on his CV. He is right! He is now on his way to Moldova to spend some weeks with his family and a particular ‘Special Lady’ whose name begins with ‘A’. Have a great time Daniel.

The other image is a postcard from Max. He went on holiday to Brsec which is a holiday resort on the coast of Croatia. I have never been there but many people I know tell me all the ex-Yugoslavia countries are well worth a visit and have lots to offer to holidaymakers.

Max wrote that he would call me on his return to Berlin. Still waiting for the call. Perhaps later this week. Looking forward to seeing you and catching up on news including your adventures in Brsec.