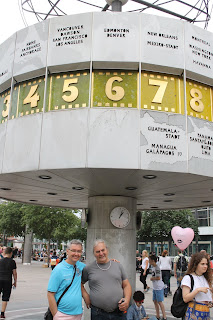 Yesterday I met Imre’s half brother for the first time. Imre had talked about him before. He lives in Debrecen which it the second largest city in Hungary. It has a population of 210,000 and is in the east of the country. It has some impressive old churches, museums and art galleries. I visited it twice on my tours to discover Hungary, but they were many years ago. 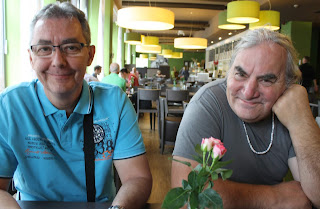 Imre had invited him to Berlin many times and finally he made it to an airport and landed in Berlin. Imre showed him around all the usual tourist sights in Berlin and asked us to meet yesterday afternoon. Guess where we met? Yes, you are right. At the famous clock in Alexander Platz. See photo. 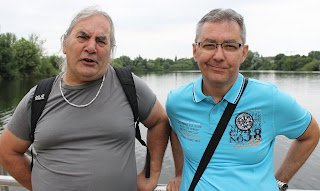 Guess where we had lunch? Right again – at the canteen/restaurant I told you about in recent posts about Ian’s visit. See photo. I enjoyed a very tasty fish dish. We exchanged news and information. The half-brother is younger than Imre. They have the same father. The half brother does not speak German or English so Imre had to act as translator. He learnt Russian at school but that didn’t help him much in Berlin.

We decided to take the U-Bahn to a small lake called Biesdorf See. Not too far from where I live. There were families with children playing on the beaches and in the water. We relaxed and enjoyed the views before going to my place. We bought cakes en route and I made coffee. I  then showed the half brother my computer programmes for working on photos. He found it interesting and sent the reduced versions to his e-mail so he could pick them up on arrival in Hungary next Sunday.

A very nice person and much quieter than Imre:-) He thanked me for my hospitality and promised us that he would visit Berlin again and not in years to come!