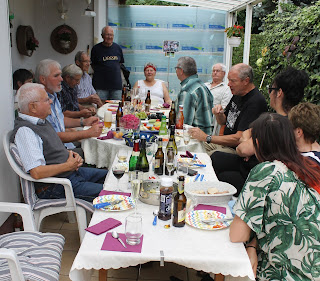 I went to a garden party yesterday. I arrived late because I waited until the rain stopped. We then had sunshine and blue skies for the rest of the day. I went to a garden house in the south of Mahlsdorf. It is to the east of where I live but it is easy to reach by S-Bahn and Tram. 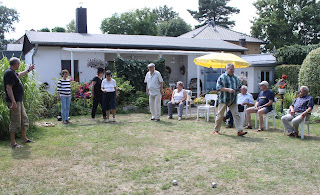 I arrived just as members of Kerstin’s Fitness-for-Oldies-Gang were sipping glasses of sekt and getting ready to attack plates of grilled sausages, meat balls and steaks. In addition there was a wide range of salads and cheeses. Very tasty!

Two members of The Gang own the property and invite the rest for such a party each summer. Later we all went onto the lawn to prepare to play a game of French Bowls. It is designed to get us all moving after the meal and sitting.

After that, we returned to the tables for afternoon Kaffee und Kuchen. The latter was mainly a range of fruit cakes. More conversation and relaxation.  One theme was football and how surprised they were that the English team had played so well. Their final game is on TV in a few hours time. I shall be watching it!

UPDATE: The English team lost, as I am sure you know by now. Even so, ‘hats off’ to them and the quality of the games plus the hospitality of the Russian people during the games. Well done to all:-))