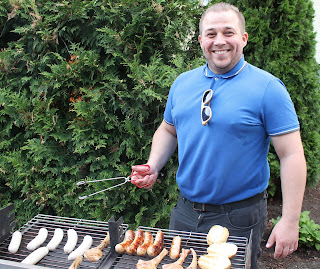 Yesterday evening I went around the corner to the nice large garden of an old people’s home. I met some of my local SPD Gang there for an evening of ‘footie ‘n grillen’. In summer there are always lots of tables, chairs and sunshades in the garden. There were lots of positive discussions about the World Championship Games from Russia. 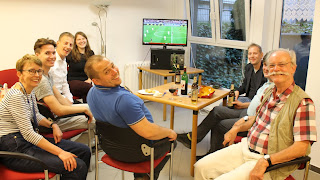 Grilling was first on the agenda and everyone settled down with a grilled sausage (Wurst) in a bread roll with mustard. In the other hand was a bottle of beer or glass of wine. I was asked a lot of questions about the English response to their new football team. All present said how pleased they were that the English team had played so well.

We then retired to the dining room in the home and settled in front of a TV screen just in time for kick off. All were surprised when the English team scored a goal in the first 5 minutes. The game then proceeded with the English team missing scoring opportunities and ended with them losing 1:2 against Croatia.

We finished off the drinks, said goodbyes and started for our respective homes. Sharing that time with people and enjoying their company and comments was much better than watching the game at home.