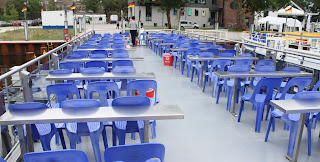 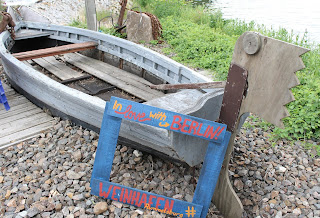 Yesterday I went on a ship tour of the centre of Berlin. I did a similar tour last year about this time and posted a report on my blog. Like last year, it was organised by my local SPD Oldie Gang. I met a local member at 12.00 noon and we set off on the 30 minute walk to Rummelsburg Harbour to meet the rest of the gang and start the tour. 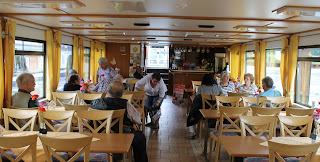 We found them relaxing in the garden next to the harbour. The river Spree flows through Berlin and forms lakes and links to smaller rivers until all flow into the River Havel and then to the north into the North Sea. I found the boat but wondered if it was the right one. See the photo top left. The boat was rather small and old and not in the best condition. 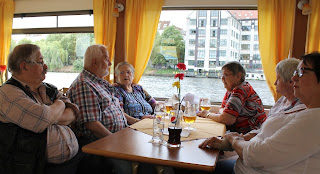 We talked to the tour company and they gave us a larger modern boat. Here is a photo of the top with lots of blue plastic seats. Lots of space for there were only 14 Oldies! We slowly settled into the lower deck with nice tables and seats. The more agile Oldies later moved to the blue plastic chair upper deck.

I spend most of the trip there. The tour lasted just over 4 hours and it was interesting to again see the centre of Berlin from the water. I think I shall post photos in my next posts. Nice to see if you have never been to Berlin.