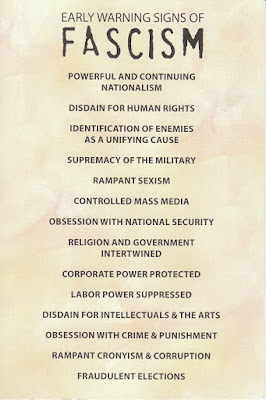 I got this postcard a couple of days ago. The message on the back contained news of another death in my circle of friends. I found myself returning to the words on the front of the postcard and thinking if they were appropriate to describe fascism.

They were written by Laurance W. Britt, who I think is American. The list is based on research of seven fascist regimes including Hitler’s Nazi German and Mussolini’s Italy. He adds that Trump’s presidency pushes the USA further toward fascism. Wow — but is that a statement!!

That started me thinking. Perhaps you could use the categories to analyse any country. I tried it with the UK and arrived at the following.

No.1 Not sure about this but nationalism is on the rise linked to the Brexit decision and it certainly was part of the leave campaign. Same goes with No.7. National security was/is part of the Brexit debate and played an important role in the decision.

No.10 applies and I consider it began with the move to Thatcher Conservatism at the end of 1979. If you read the British newspapers and listen to BBC News  you will agree that No.12 is correct. I think the word obsession is not too strong here.  Must try this list on other countries!