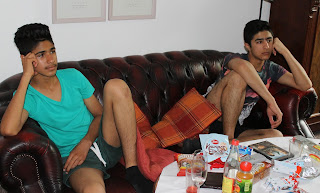 On Friday I got a call from Bro1. He wanted to visit yesterday. I agreed and he arrived with Bro2 in the afternoon as agreed. They looked well and healthy. We set off for my local supermarket to buy the food, snacks and drinks they needed to get them through the afternoon and watching a DVD. 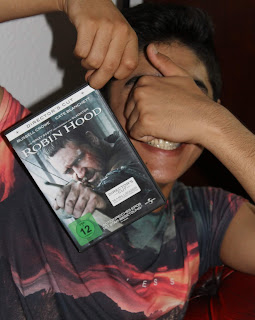 They chose pizzas to begin with and as they ate we caught up on family news and events at school. We also talked about Ramadan and religion. They were able to make a difference between religion and social/community practice and pressures which had no foundation in religious belief. A very interesting discussion as they munched away.

They then reclined on the sofa and started a film called Robin Hood starring Russell Crowe  and directed by Ridley Scott. You probably saw it in the cinema as I did when it came out. They really liked it but we had to stop the DVD at various points so I could answer their questions such as what a crusade was, where is Nottingham and Sherwood Forest. We agreed to look for information in the internet when they next visit.

As they watched they slipped into ‘cushion hugging’ as usual and munching crisps and other snacks. They washed it all down with fruit juice and water. More discussion after the film ended then Papa called to ask when they were coming home. They left happy and smiling plus with 3 bags of clothes for mother and sister. Sure it made them happy as well :-))