In my last post I told you I left home to meet Johanna then go to ‘Putta’s’ house. I didn’t tell you that I lost my mobile phone on the way to meet Johanna. I put the phone in a section of my rucksack which does not have a zip fastener. As I hit a bumpy part of the road near to where I live I heard something whiz past me and hit the road. 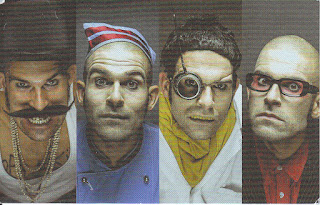 It was my mobile! I searched under parked cars but with no success. I cycled back home and found my reserve mobile and so set off again and met Johanna later than planned. Later that day I called lost-mobile from new-mobile and got a recorded voice saying they would call me when lost-mobile was switched on. Hope you are following this story!

And that is what happened. A gentleman found my mobile and turned it on. We arranged to meet yesterday (Tuesday) at 2.00 pm. He and his family are moving into a flat two streets away from where I live. Nice to get my phone back and have a chat with him.

He is an actor, comedian, dancer in satire shows, comedy and theatre. He goes by the name of Elias Elastisch and you can find his homepage using that name. Very pleased to meet him and he spoke very good English with me. I noted that he will be at the Edinburgh Fringe for most of August this year. Go to his show if you are there.