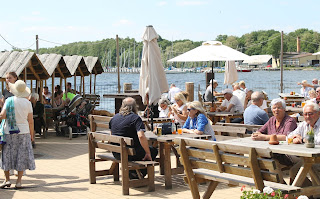 You should know who Imre is by now. For new readers he was one of my fist students at the British Council School in Berlin and comes originally from Hungary. We have maintained contact over many years and changes. We met for a bicycle tour last Monday, which was a public holiday and arrived with lots of sunshine, blue sky and 25°C. 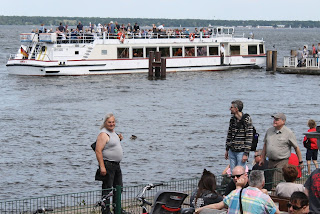 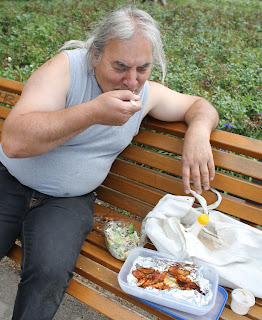 Half of Berlin was outdoors enjoying the weather, picnics, grilling and being with family and friends. Many of them were at Müggelsee. It is the largest lake in Berlin and lies to the south-east of the centre. It has lots of cycle tracks and tracks for walking groups. It is one of my favourite areas and I have posted about it before. 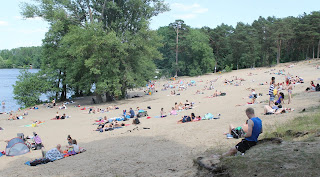 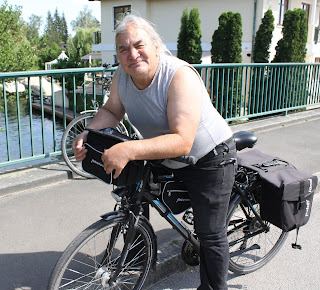 I met Imre at my local S-Bahn station. We set off for a village/suburb of Berlin called Friedrichshagen. There is a long street called Bölschestraße which leads south to the northern shores of the lake. I really like this street for its range of shops and architecture. Half way down there is a square opposite the church and in it is a statue of Frederick the Great. He was actually small but the word Great does not refer to his size. Here you can see Imre posing with him. 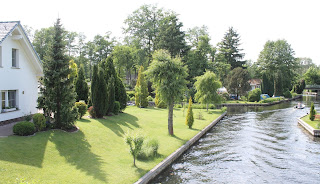 We arrived at the lake and saw lots of people relaxing, drinking beer and eating roast sausages. Nothing new there! Imre joined in and started to eat food he had brought with him. I walked around for it was too early and I wanted to enjoy a meal in a restaurant I knew on the south shore of the lake.

We went into the tunnel and crossed to the south side, then onto the bikes. We found a table at the restaurant I planned to visit and Imre watched me eat a tasty traditional lunch washed down with a local beer. Mmmmh…tasty! Imre then walked to the shore as a ferry arrived and so I took this shot of him posing with the ferry!

And off again on the bikes. In the next photo you can see he has a very good and new bike. He has three bikes in total but this is his favourite for a days tour. We later arrived at another small lake and saw lots of people relaxing, sleeping on the beach and just soaking up the sun. You can see this in the photo.

We cycled along the bank of a river and arrived at a small bridge. We watched lots of boats sailing under us before we set off again. The small roads took us through wonderful green areas with house and villas. I have no idea what such a house/villa would cost but I think you would need to have won the jackpot to buy such a property. In this photo you can see part of such  a house with garden and lots of water. I wonder where they keep their boat/s?  Further pedal pushing and we arrived back at the S-Bahn station and train to take us to where we started. A very memorable day and all possible because of the weather.