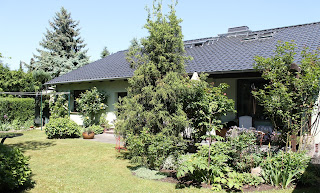 I went to the southern part of Mahlsdorf yesterday. Lots of greenery, nice houses and flowers. It is in the east of the city. I met Johanna and we began the cycle ride to our destination. That was to have breakfast with four other people at a house owned by a lady we call ‘Putta’. 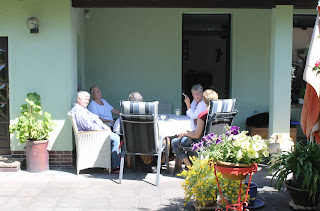 The weather was great with lots of sunshine, 25°C and a light wind. I had never been to the house before but my guide knew the way. I cycled behind her as she guided me to the house. Very nice indeed as you can see from the photo.

It has large gardens front and back with lots of trees, bushes and flowers. We had a long lazy holiday breakfast in the dining room then retired to the relaxing area/seats in the rear garden. Lots of talk about many topics and then we sipped a glass or two of cool, refreshing sekt.

I then cycled to a(n) S-Bahn line which took me near to Alt Landesberg. Another cycle ride before I arrived at Peter and Andre’s house. They were waiting for me in the garden. We had Kaffee und Kuchen and caught up on news. Peter is going to Moscow soon on a business trip and Andre will join him later for a couple of tourist days. They were busy with visa applications before I arrived.

And so ended a very memorable Whitsun Sunday / Pfingstsonntag. Now to prepare for a cycle ride around Muggelsee with Imre! I wonder if he will find anymore signs for ‘Box To Go’?