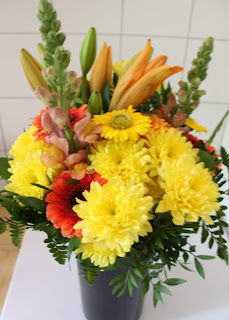 This word means ‘commemoration ceremony’ in English. I went to one on Wednesday afternoon. An interesting experience. It was organised by the local council and museum. Members of the public were welcome to attend the ceremony. I got an invitation via my contacts and work for Lichtenberg Museum. The local Mayor was also there. 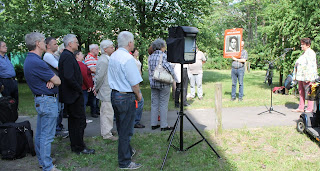 The event was to commemorate the life, and death of Artur Becker exactly 80 years ago, and add his name to the memorial list. All were local communists or jews or both in the 1920s/30s. We met at the address where Artur Becker lived. In 1930-33, he was the youngest member of the German Parliament for the KPD = Communist Party Germany, and in 1931-32 Chairperson of the Young Communists.

He went into hiding from 1933, sure you don’t need me to say why, and surfaced in Spain in 1937 as a member of the International Brigade and fought in the Civil War against Franco’s Fascist Army. He was captured and imprisoned. He is believed to have died on 16 May 1938 after being shot in a prison at Burgos.  Here is a photo of part of the ceremony and some flowers from me.