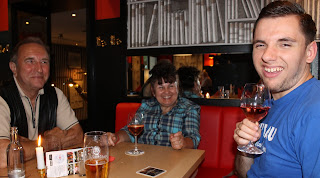 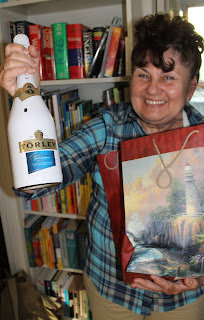 What a great weeks so far! It started with an e-mail from Marcel last weekend. He said he wanted to visit on Monday and go to a restaurant with me before he left Berlin on Wednesday. That is today and as I write he is probably asleep in the back of his parents car as they head home to Hungary. 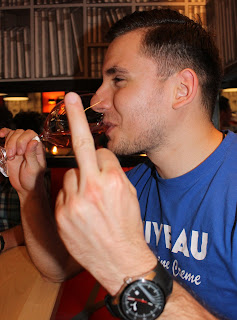 I agreed and told him to come at/after 6.15 pm on Monday. At 6.30 the bell rang. I opened the door and he came in looking very well and healthy. We greeted each other then I told him to close the door. He smiled and said no. Just then two people came through the door with big smiles and greetings. It was his parents.

I had no idea they were in Berlin. They arrived on Saturday to help Marcel pack his things. He has finished his BSc. studies and so closing down in Berlin. He will stay a week in Hungary and visit friends and his grandparents at Lake Balaton. What happy memories I have of my time with them there. A week later he will fly to Chile for a year.

I think in modern academic language it is called a ‘Gap Year’. He has got a scholarship to learn Spanish there and just live in the land with the people. I think it is a great idea and opportunity for him. A year later he will return to Germany and start studying for his MSc. in mathematics and physics. Phew, but is that a subject! We agreed to meet on skype once a month and exchange news.

His parents brought me some presents and then we left for a local German restaurant. It was their wish for they had been there before and enjoyed the food and service. We settled into the restaurant and so started an evening of chatting in 3 languages, lots of jokes and smiles, good food and drinks.
Sadly all nice things come to an end and so I walked with them to their car and we said our goodbyes. What a wonderful evening for I had no idea of what was to come. Thanks to each of you for such a wonderful surprise visit.