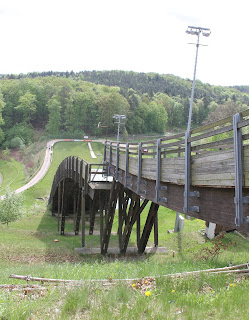 Yesterday was a public holiday and it did not rain in our area. Unfortunately the Brexiters could not celebrate because Mrs Thatcher and her Conservative Party stopped 1st May as a public holiday many years ago. Possibly the first sign of ‘Brexit’ mentality and the long history of class division. 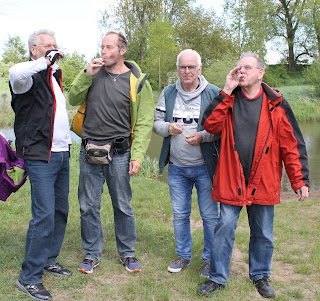 Johanna and I met my Muggelsee Gang for a bicycle ride starting in Bad Freienwalde. This is a town north east of Berlin and not far from the River Oder and Polish Border. We met at station Lichtenberg in the east of Berlin and took a regional train to Eberswalde. Then a change of train for the shorter journey to Bad Freienwalde. Get your maps out to follow the tour and learn something about this interesting corner of Germany.

We started the tour by cycling to a ‘Skisprungschanze’ = Ski Jump. I had no ideas there was such a thing there. We then cycled south through the woods until we got to a lake called ‘Baasee’ There we stopped for a picnic. Very tasty! A nice, big, old dog smiled at all of us from under the picnic table but did not notice that he was wearing a collar saying ‘Do NOT feed me’ written in German! We followed the command! 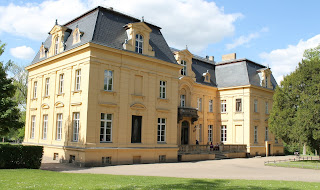 Off again to the east and a river  that feeds into the Oder behind high protective banks. There, some of the Gang had a doze on the grass while others sampled something in small bottles. Yes, it was us ‘Lads’ sampling again! From there we cycled north to stop at the park and Schloss Altranft.  Here is a photo of us relaxing there. 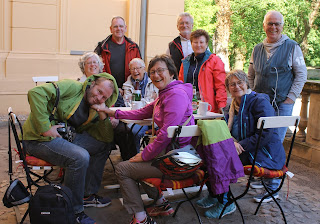 Now for a little history lesson. The first record of a ‘noble’ manor house there was in 1375 in which the family von Pfuel lived. In 1664 it was sold to Wolf von Bomsdorf who had it re-built in the Barock style. It was sold to the von Marschall family in 1739. They sold it to Graf von Hake in 1820 whose family lived there until 1916.  Then it was sold to the Wertheimer family with a background in trade and business. No ‘von’ title, just money!  In February 1945 it was taken over by the Soviet Red Army. In 1949 it became the property of Land Brandenburg and used as a school and library. It became a museum in 1992 and in now a protected building.  Well worth a visit the next time you are in the area.

Having rested and enjoyed the Schloss and garden we set off on the short cycle ride back to the station where we started and then two trains back to Berlin. We covered 34 Km on that tour which is not bad. We were all able to get home just in time to watch Bayern play Real Madrid. Although the score was 2:2, Bayern lost on goal average – but they played very well!