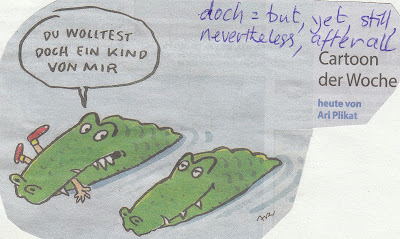 How about this cartoon? I really like it, but then I have always liked what some call ‘black’ humour and others call ‘sick’ humour! Who said that Germans do not have a sense of humour? It really is rubbish. There is a long tradition of humour of all sorts including jokes and double meaning in language such as this ‘croc’ joke.

Now for a little lesson in German for my Silsdeners. What is croc 1 saying to croc2? As usual some words can be translated in many ways. Let us take ‘doch’ in this joke. It translates as but, yet, still, nevertheless, after all. Which one is correct here? The answer is the last one = after all. 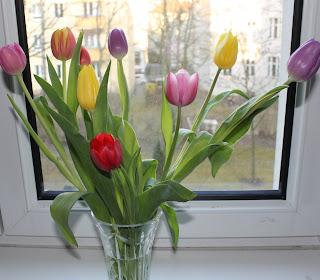 What else have I been doing since my last post ? I cancelled two appointments last weekend. I am having a bad time with my allergies. I decided to stay at home and just put drops and other medicines into my eyes and nose. They look terrible from blood in my eyes so I wear sunglasses when I leave home.

In addition to all my usual things, I went to a film/meeting/discussion about refugees in Berlin, a new local SPD group to consider how to build the party locally and a meeting of supporters of the local museum. I hope to have a relaxed and lazy weekend before the bicycle tour next Tuesday. By then I hope my eyes will have stopped looking like Dracula’s! Here are some flowers for you!