I recently got an e-mail from Ian in Oz with the title, “Loony academic-speak”. Great title for what came next. Here it is. The first part is his comment and the second is what the academic said. 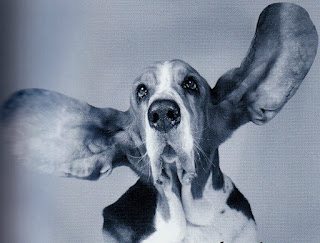 This is an academic administrator at Harvard University criticising student clubs that limit membership to men or women
“The discriminatory membership policies of these organizations have led to the perpetuation of spaces that are rife with power imbalances.”

Er….ya…like….er..wot….eeeeerrr ?!! What does this say for academia and particularly for Harvard University? I think I shall go there and re-introduce an old practice. It is called putting someone on/into the stocks. Made of wood and with holes for head and arms. When the academic is in the stocks then the public may throw rubbish at his/her head. Rotten food was popular in the Middle Ages but I think we could allow used toilet paper nowadays! After that the academic would be forced to attend an English course based on plain speaking.

When I said the words out loud, my neighbour’s dog called Bello, barked out loudly that it damaged his ears. Here is a photo of the reaction of his ears to the Loony Speak. Poor Bello, and anyone in Harvard who has to listen to such drivel from academics.