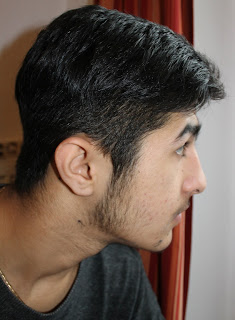 At the end of my last post I said I was waiting for The Bros to arrive and that on Friday I was going cycling with Imre. On Thursday evening only Bro1 arrived. He said Bro2 was in bed fighting the flu. His parents and sis were all busy peering into various books and doing German homework!

We galloped to my local supermarket for him to stock up on crisps, fruit juice, snacks and pizza. All needed to make watching a DVD even better. He settled down in front of the screen with lots of juice and crisps. He wanted to watch the 3rd of the Jason Bourne films – and in English. He asked me a few times what some words meant but he could generally follow the dialogue. 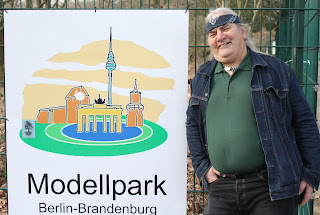 At the end of the film it was time to tuck into a pizza followed by chocolate cream pudding. He decided to stay longer and watch another DVD. It was nice to spend time with him. We had time to talk to each other without cross-talking to other members of his family.

He asked me about his new beard. Should he keep it or not? I said he should if only to see how it grows and what he looks like. If he didn’t like it he could later shave it off. He smiled at my answer for he clearly liked the logic. He decided to let it grow! We talked about his future plans for training courses before he put on his coat and left. 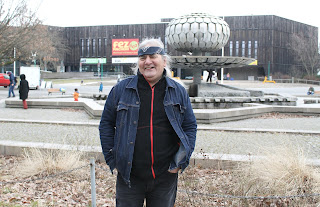 Yesterday was Good Friday and I had agreed to meet Imre at my local S-Bahn station at 10.30 am. He had cycled from home on the newest of his three bikes. It has lots of bags which he fills with bottles of juice, snacks, cameras (he also has 3 of them!) and extra warm clothes. He wanted to cycle to the local park for it has an area with all kinds of activities for children – and their parents. It is called Wühlheide. I have posted about it before.

One of its attractions is a large outdoor area containing a Model Park of the centre of Berlin. Well worth a visit when next in Berlin. Imre posed in front of a sign. He wanted to send the photo to his lady friend. You can see he looks very well and happy. We then went to the main area of the park. Here you can see the main building behind Imre. We decided to have lunch there. The restaurant was next to a swimming pool so we could see kids and their parents jumping in as we chewed on our lunch. It was really nice to see so many young families enjoying the facilities.

Later we landed at my place. Imre wanted to relax over cups of tea and cakes. Lots of talking before the sun began to set and he jumped on his bike and started the journey home. A very nice day. Hope you enjoyed your Good Friday.