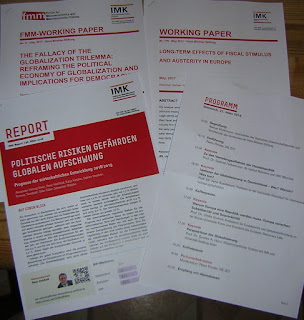 It’s snowing – again! And we are only 3 days officially into Spring. Fortunately I have no appointments or plans for today so I shall keep warm and continue to read my books. This is very different from yesterday. 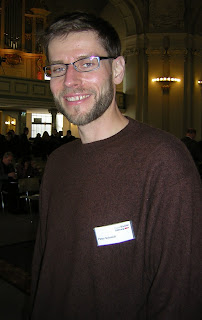 I met Dr. Peter von Long-Legs at an academic gathering. I mentioned this at the end of my last post. It was really nice to see him again and looking so well – as you can see in this photo. His mother also came along and it was nice to chat to her again. It was a long academic session starting at 3 pm and ending at 8 pm with a reception and meal. There were two half hour coffee breaks so that made it bearable.

The event was sponsored by a foundation with historical links to the SPD and was held in one of two large cathedrals in the old centre of Berlin. We met in the Kirchensaal des Französischen Doms. You may want to look for more details on/in the internet. The topic was The Crises of Globalisation.  The hall was almost full, mainly of academics and research students.

There were four presentations given by professors from universities in different parts of Germany. The first was about the distribution of trade. The second was about who and why are there losers in Germany. I really liked the third one for it got me thinking. The title was Why Europe must be a Republic and the speaker gave a strong case for her argument. The final professor talked about Globalisation Perspectives.

I liked being again in the company of academics. I noted how many of them spoke to others in animated ways during the breaks and even with waving their arms about managed not to spill their cups of coffee! Thanks Dr. Peter for telling me about this event and I look forward to our next meeting.