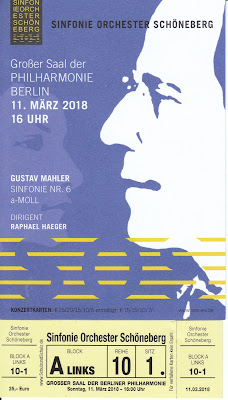 In my last post I ended by saying I was off to the Philharmonie to listen to Mahler’s 6th Symphony and relax. Was that a mistake! Relax? No way! Phew, but it is a musical beast! I have just looked at my CD collection to discover I have all his symphonies except 6 and 7. Yesterday was the first time I had been to a live performance of the 6th.

I looked in my BBC Proms Guide to Great Symphonies and read an interesting review of the piece. Let me quote the introduction: ” Ever since Mahler conducted the first performance of his Sixth Symphony in May 1906, commentators have tried to pin down what it is all ‘about'”. I think that sums up the piece very well.

The comment then goes on to say that many, “including his widow Alma, maintained that the Finale portrayed an individual’s heroic struggle against implacable fate, symbolised by the three huge hammer blows that occur at strategic points throughout the movement. Yet the Sixth Symphony was written at the most fulfilled period of Mahler’s life”.

He married Alma in 1902, wrote the 6th Symphony in 1903-4 and they had two daughters in that period. He conducted the first performance in Essen in 1906. So far so good, but in 1907 three things happened. Daughter Maria died, his contract as conductor at the Vienna Opera was not renewed, and he was diagnosed with a heart condition that would cause his death in 1911 = four years later! How can all that be interpreted into a piece of music he wrote in 1903-4?

Back to my BBC book. It says, “The Sixth Symphony simply exists: disturbing in its nihilistic despair, yet ultimately attaining a true and monumental grandeur”. Also that, “The orchestral forces are formidable”. Is that an understatement! Finally we can read that, ” The ending itself is perhaps the bleakest in all music”. If you decide to go to a performance don’t say I didn’t warn you!!