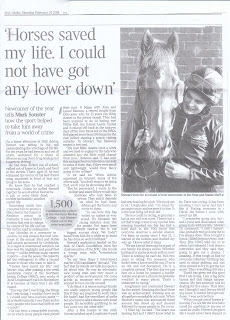 In addition to Holger’s book, the postal service delivered a letter from Brexitland. It was from Alan. As regular readers will know he is my oldest and dearest friend. We met when we were 16 at Leeds College. He later married Lynne and they started a family. I sent Jan to them when he was 11 and wanted to learn English. They are a wonderful couple who embrace anyone in need.

Inside the envelope was a photocopy of an article from The Times dated 24th February 2018. It was about a 29 year old man called Adrian Stewart. He had won a prize as the Best Newcomer at the annual Stud and Stable Staff Awards.

I hope you can read the headline of the story. It is: “Horses saved my life. I could not have got any lower down”. He had been kicked out of school, walked out of home in Leeds and lived on the streets. Aged 15 he saw his best friend murdered who then died in his arms. There then began years of prison sentences for crimes such as drug dealing and dangerous driving.

Now for a special quote from the report: “It began with Alan and Lynne Bateson a retired couple who for 13 years ran Bible classes in the prison chapel at Wealstun prison in Wetherby. It was a fateful decision that was to change the course of his life and set him on the road to redemption.” Alan saw information about a racing school on TV and contacted them. They agreed to meet Adrian and then accepted him as a trainee.

This changed his life. Well done Adrian and also to Alan and Lynne who helped and supported him in finding a new direction. Adrian is only one of many people they have helped in many ways over the years – and they are still doing it :-))