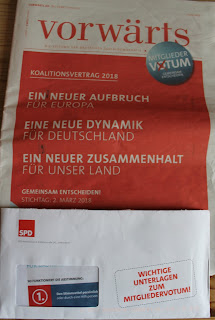 The right to vote is now considered to be a fundamental right and one which defines a democracy. It was not always so as anyone who has studied European history will know.

Last Monday I found an envelope in my postbox. From the words on the envelope I knew immediately what was inside. It was from the SPD Central Office and contained information about how to vote Yes or No to the latest Gro-Ko Coalition Proposal. It is about creating another Grand Coalition with the CDU/CSU to form a government.

I do not normally report on political events in Germany on my blog.  I take it you get such information from your local radio/TV wherever you live. This decision, with national consequences, must be made by just over 465,000 SPD members.  I am one of them as you know. Members of the other two parties do not have the right to vote.

I opened the envelope and slowly read all the information. I then followed the instructions as to how to vote. Having done that, I  took it to my local post office. We shall know the result on the 2nd March 2018. I bet you are wondering how I voted. It’s a secret and that is another valuable democratic right!

In the photo you can see the voting envelope and a special copy of the SPD magazine called ‘vorwärts’ which means forwards. The magazine contained 73 pages detailing the Gro-Ko Agreement. Phew, but was that a lot to read!