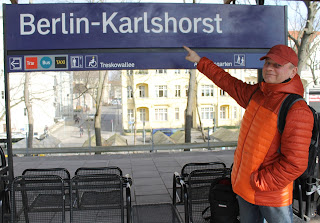 Last Wednesday Stefan S. came to visit. He now lives in Halle although he still owns a flat in the north of Berlin. I went to Halle many years ago with Oldie Hermann, but I have forgotten the details. Everyone tells me it is a nice, interesting town with old architecture. I’ll see that for myself in May when I visit. Yes, Stefan invited me to see the place and stay in his ‘Schloss’ = Palace. Looking forward to that. 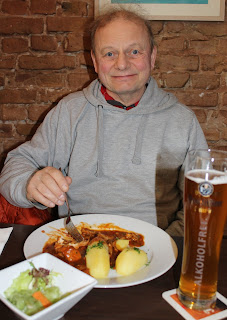 I have known Stefan for as long as I have lived in Berlin. Many years ago I lived in Bremen and then planned to move to Madrid in Spain to teach at the British Council School. I never got there. I visited friends in Berlin to see their new born daughter. They told me about a flat in the east and that the British Council were advertising for teachers at a new school in Treptow – a district in the south east of Berlin. I applied and got a job there. 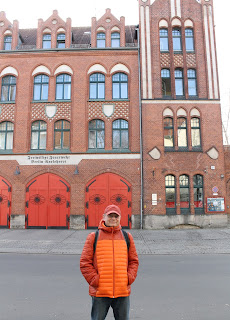 I also moved into the nice large flat in Marzahn in the north-east of the city. The friends knew Stefan through another friend and heard that he was looking for a place in Berlin. He then lived in Munich, the capital of Bavaria in the south of Germany. We met and I agreed to share the flat with him. One week later he arrived with his things and the motor of an old Peugot car which resided on a wooden support at the entrance to the flat. I said ‘Hello’ to it whenever I left or entered the flat :-))

And so we got to know each other. Stefan speaks perfect English for years before he lived and worked in England. He has never spoken German with me! Later he bought a flat in the north of the city and moved there, and nearer to his work. We have always kept in touch and visited each other for different events and parties. And so the years ticked by.

This time I met him at my local S-Bahn station as you can see in the photo. We then went to a nearby restaurant for lunch and catch up on news. I took him to a project where people with psychological problems are trained to cook and work as waiters. They offer a fixed lunch menu each day. Stefan was happy to go there and support the project. The food was also very tasty as you can see from the photograph. Note the words on Stefan’s beer glass = ‘Non-Alcohol’. I had a glass of red wine with my food.

I then took him on a tour of my area. Not far away from the restaurant is the local fire station. He really liked the architecture. It was one of the first to be built when my district was founded at the end of the 1890s. We then landed at my place for a coffee before he had to leave for his flat, pick up his car then drive back to Halle. A very nice day with a very interesting person.