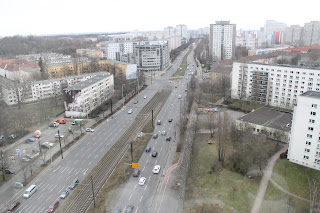 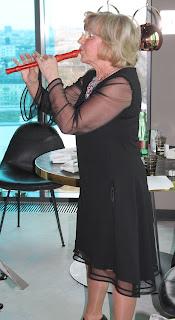 The hotel is new and on the Landsberger Allee at the junction with the same named S-Bahn station. If you stay on this road you will reach the Polish border. Continue on the road until you come to a large town on a river. It was called Landsberg before 1945 when it was part of Germany. The border was  moved and it got a new name of Görzöw Wielkopolski. I used to often drive there to visit friends years ago. 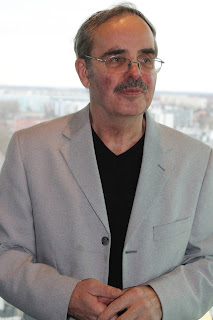 In the photo you can see the Allee heading east and in the distance there are some high rise flats. I used to live in one of them on Judith-Auer-Strasse. It was my second address in Berlin and the English teachers’ association was founded in my living room. Nice to look out of the window and think back while enjoying the birthday party.

It was Frau Dr. Inge Pardon’s 70th birthday party. Here is a photo of her playing the flute. She also plays the accordion, speaks fluent Russian and is still a guest lecturer at the University of St. Petersburg. I met her via Birgit Gast. Inge and her husband, Dr. Dr. (yes he has two!) Michael Pardon had recently opened a language school on the Ku-damm’ and Birgit started teaching there. She told them about me and I was invited to teach a few test classes. The student report back was good so they offered me a contract, which I accepted. And so started a close relationship that has lasted until today.

I have reported about them before on my blog when I go to their summer garden parties. Nice photos and stories in the blog archive (to the left at the top of the page you can access all the archive posts). The food and service was really good. I chose fish with an appropriate cool white wine from a vineyard in the south-west of Germany. Very tasty! And so the clock ticked on and it was time to leave. We promised to meet up again and in their big garden for a summer party. Looking forward to that!