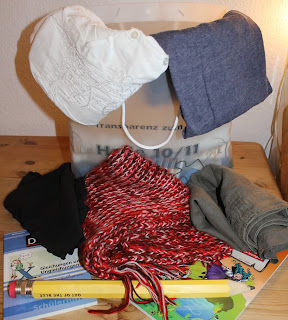 Last Friday Bro1 rang to ask if he could visit on Saturday afternoon because he needed help with some school work. I agreed and the bell rang only 20 minutes after the agreed time! He was not alone. Bro2 followed him through the door.

Bro1 showed me his school report, which was good. We talked about it then Bro2 dropped some papers onto the table. It was his German homework. Mainly reading and answering comprehension or grammar questions. Both were on holiday last week. I asked why he had not done any and what he had done with his time.

He hung his head and said nothing. There then started a big argument between them. Bro1 was angry that little Bro had done nothing and expected me to help him regardless of what other plans I had. I separated them into different rooms and put a laptop in front of Bro2 and told him to translate into Persian any words he did not know as a first step. I then returned to Bro1 and helped him with his task. And so I passed the afternoon moving between their workrooms. 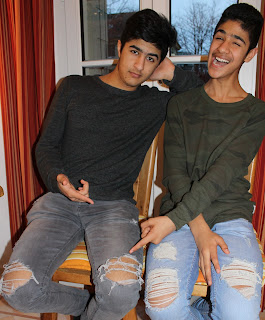 Bro1 finished first so I got him to help little Bro. The hours ticked away. Time to have a break and eat. First a big bag of crisps. Bro2 munched away as he finally finished his homework. Time taken = over 4 hours! Bro1 then wanted to watch a DVD so I told him to find one. He did just that as they settled onto the sofa and the last crisp. I had thrown different kinds of pizza into the oven, and so they chewed pizza, watched the film and then smacked their lips as they ate chocolate cream pudding.

In my last post, I told you about buying clothes for Bro2 and made a comment about buying what I am told is ‘ripped jeans’. I was surprised to see Bro1 wearing such jeans. We had a short discussion about wearing such things in winter. They said what mattered was to have the same style of jeans as the other boys in their class/school. I still don’t understand why with holes and rips. They let in the cold air but The Boyz like wearing them, as you can see in the photo.

Angelika had visited a few days earlier and left a big bag of clothes for their mother and sister. The Boyz took this with them plus all the completed homework. I threw some bananas and cakes into  another bag – in case they felt hungry on the way home. Lots of smiles as they left and with the shouting argument between them long forgotten.