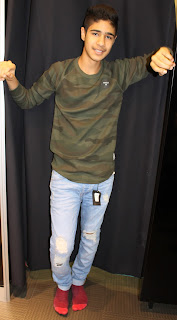 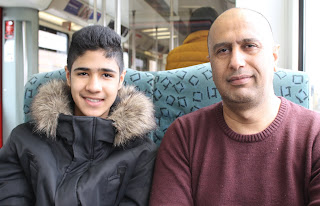 I had a very nice day yesterday. It actually all started on Friday. First to Kerstin’s Oldie Keep Fit Gang then to Stefan and the Photoshop Gang. After returning home the bell rang and Bro2 entered. We had arranged for him to cut my hair. First glasses of healthy fruit juice, which he likes, then to the scissors!

Lots of looking at how my hair had grown since the last cut, then getting his opinion about the next cut and so it was decided to have it short on the sides and not to cut it on top. He took his time and so created another ‘masterpiece’ on my head:-)) Then it was time for coffee and cakes. He also like them a lot. As we sipped and munched we decided on when and where to meet on Saturday. He still had a credit of 50 euros as a Christmas present from Peter and Andre. 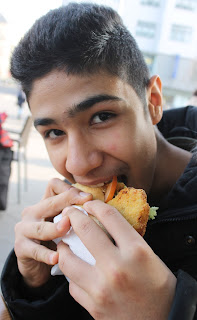 He had found some clothes in a sale at Primark near to the S-Bahn Station Rathaus Steglitz. It is a district on the other side of the city and takes 50+ minutes to get there. I jumped into the train at my local station and found Bro2 waiting for me inside with a bonus — yes, Papa had decided to join us. It was interesting to talk to Papa in English on the journey and in German to his son. He has English lessons at school but I am not sure what they do in the lessons!

And so I got Bro2 to practice his English, but in writing. I always have paper and pen in my rucksack so I wrote questions in English and Bro2 had to reply. He did this with no problem and it kept him busy during the journey. We finally arrived at the store and he found a range of clothes he wanted and tried them on. I took a couple of shots with different tops and ‘modern’ jeans. What else can I call them? They have holes etc on the legs but are ‘in’ with young people his age!

He also bought socks and two woolen caps plus another top. The total was €51 but I said I would pay the extra €1. That really made him smile so off we went to pay. I was feeling ‘peckish’ and thirsty so we found a nearby shop where I bought snacks and drinks. That made both smile even more. I like this shot of Bro2 really biting into his snack and clearly enjoying it.

We headed back home and said out goodbyes. Daniel came to visit later. He needed help with a project for his English class. He is studying hard for exams at the moment. After he left I changed clothes and set off for Berliner Philharmonie to enjoy a concert called ‘Klassik trifft Romantik. It started with a Mozart piano concerto before moving onto Dvorak’s 7th Symphony. The perfect way to end a very pleasant day. Hope your Saturday was as good!