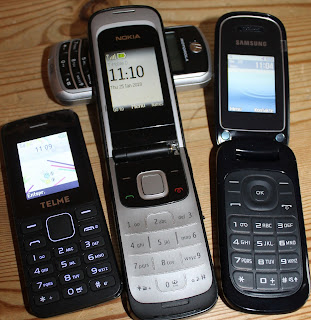 I had a smashing time last Thursday evening – literally! For years I have used a Nokia as my mobile phone (UK name). In the USA you say it is a Cell Phone and in Germany it is called a Handy. Its successor is called a Smartphone in all three countries. People ask me if I have a Smartphone and I always answer that I only have an Un-Smartphone :-))

And lo it came to pass that I dropped my Nokia and broke half of the connecting sections. Over a few days the damage spread to the other part so that when I opened the phone it went on then turned off. I sadly realised that the day of Nokia was over. I looked in my electronic rubbish drawer and found an old Motorola mobile. 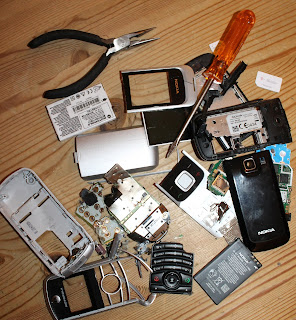 All my phones use Deutsche Telecom chip cards and it still had one, but out of time/use. I think I bought it in the USA. The big problem was that I could not find any equipment to load the battery. I decided that it had to join Big Brother Nokia for a smashing time. I am always curious as to what is inside such phones.

I  moved my reserve Samsung into Position 1 as my mobile and put the chip from the Nokia into it. It worked okay. I then went to an electronic store to see if I could get equipment to activate the Motorola. They said I could but it would cost a lot more than buying another phone. They had one called Telme for just Euro 20,-. I took the cheaper option and bought it.

I then went to the Deutsche Telecom shop next to the store and got a chip for Telme. It is now working as my reserve Mobile Phone with the Samsung as my main one using  the same chip and number that I have used for years. On Thursday evening I decided it was time to find out what was inside Nokia and Motorola. A few bangs and bashes exposed the insides of the phones – as you can see from the photos. What a smashing time I had :-))