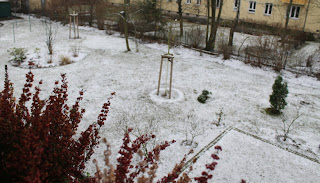 I got an interesting comment about my last post. It was about the photo of my haircut. The comment was that I had big ears! Nothing new there. I replied that readers should not forget to look at the photos on the left hand side of my blog. There you can see images of key points in my life. One is of me as a child with mouth open and BIG ears! I replied that I had to get used to living with elephant things on the side of my head :-)) 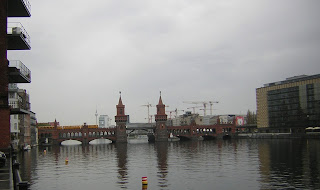 I had some interesting meetings last week. I mentioned that on Tuesday I went to a Berlin Labour Party meeting. Next day it snowed. I shall show you a photo of my garden then. I decided to stay at home, do paperwork, read and relax. I did just that. Next day I had Kaffee und Kuchen with Marita and a good discussion. On Friday I went to Kerstin’s Keep Fit for Oldies Group as usual each Friday morning. 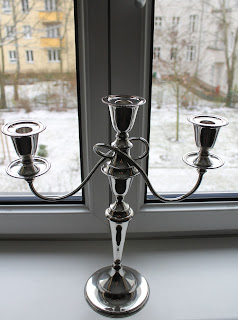 In the afternoon I went to Stafan’s Photoshop Gang first meeting of the year. It is not far from the bridge you can see above. Nice to see all again and catch up on what they had done over Christmas – New Year. That evening Daniel arrived to work on his English text, describing a cartoon, which he has to give to his classmates.

Yesterday I went to an eltabb workshop. This is the English teachers association I co-founded many years ago. It was about teaching Business English 1:1 and given by an ex-chairperson who now lives in Alsaas. Later we went to a restaurant in the centre of Berlin which offers Italian meals. It is well known for its range of giant pizzas. I normally go for pasta dishes when I sit in an Italian restaurant. I made the right choice!

This evening I am going to The Philharmonie for a concert of Schumann and Schubert. Meanwhile, The Boyz are travelling to my place. I got a call earlier from Bro2 asking if they could visit and watch a film on my flat-screen. I agreed. I think they want to watch a Blu-Ray of Prometheus. I have seen the film but can’t remember what it is about. Must be getting old and losing my memory!

This afternoon a special SPD conference is taking place to decide to accept, or not, a proposal to set up another Coalition Government with the CSU/CDU. My spies tell me most members are against and they have the final decision after today’s conference. I shall watch reports over the internet while The Boyz doze off while watching the film! Oh to be 17 and 15 again and fall asleep anywhere!