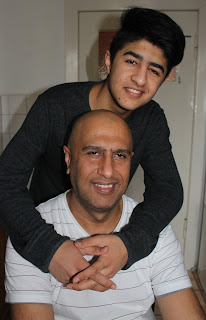 Last Sunday I relaxed in the morning before ‘The Lads’ arrived early afternoon. They left ‘The Lasses’ at home. I didn’t expect Papa to be with ‘The Boyz’ but it was nice to see them together. They quickly made themselves at home. They know my place by now and where everything is. I later noted that ‘The Boyz’ always ask my permission to go to the toilet, watch TV or use a computer. Very polite! 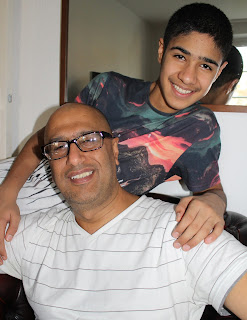 They said they wanted to practice some English then watch an action film. Papa needed to print out some documents, so I left him to do so with my printer and laptop.  Bro2 said I needed a haircut. We discussed the style and both Boyz agreed it should be longer on top and shorter on the sides. They both set to work this time. Bro1 used the machine and Bro2 told him what to do. I said nothing, just sat quietly and let them get on with it! A number of people later said it made me look younger!

The boys then wanted to watch a film so I let them chose one. The picked a Blu-Ray of Avatar. They settled onto the sofa with cushions, fruit juice, cakes, biscuits and all was quiet as the film started. Papa said he had to go home to cook a meal for the family. Apparently he is a ‘hobby cook’ and likes preparing a meal for the family. We said our goodbyes and I returned to the boys. They sat there with eyes and sometimes mouths open as they watched the film — in English!

They say it is important for them to watch/listen to a film in the original language and try to match the words they hear with what they can see. Makes sense! It was nice to share a few hours with them – and have a new ‘Boyz’ haircut! Here are a couple of photos of them with proud Papa!