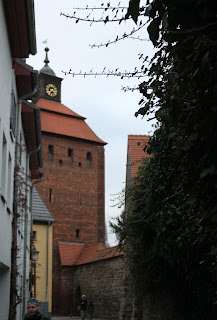 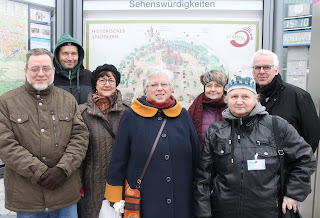 Last Saturday I went to Bernau bei Berlin. It was the winter meeting place for my Muggelsee Gang. I have talked about them before. Two members were missing due to flu. We met at Lichtenberg rail station – two minutes before the train left! – and settled into catching up on news.

We were met at Bernau by Larissa and her husband, who had organised the meeting. We met a lady outside the station. She was our guide, yes, we were to be taken on a guided tour of the town. She introduced herself and started to talk about the tour she had planned. She then looked at me and said, “I know you.” 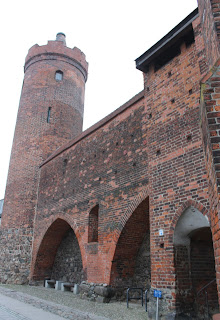 I replied in the affirmative. Ten years or more ago I used to teach at a re-training college opposite the railway station. The college had now closed. Our guide was then in my class! She is now retired but likes to take people around the old centre of the town. In the group photo you will find her in the right hand corner at the front. What a nice surprise.

We set off on our tour and I learnt more about Bernau than I ever did when I went there twice a week to teach at the college. It really is an interesting old town with impressive walls, gates and what remains of an old moat. All designed to protect the town. At the start of June each year there is a festival with procession that depict the history of the town.

First record of a settlement is sometime early in 1100 AD. There was also a famous victory there against a ‘Hussite Army’, then came the Black Death, and so on. As all this was happening Berlin did not exist. It is a relatively new city. The history of all the area around Berlin is that of all the old towns like Bernau. Well worth a visit.

We ended out tour at a very old restaurant in the old centre of the town. It was great to relax, have a meal and sip the famous local dark beer. Try it when you are there. I then moved to a light white wine which was perfect with my fish dish! A really pleasant day. The next Muggelsee Gang meeting is on the 1st May for our traditional bicycle tour. I’ll tell you about it then!