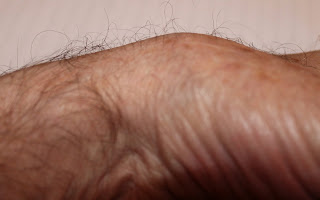 The base of the thumb on my left hand has been swollen since October. I decided to just observe it and go to the Doc when something else was wrong. I asked a few other people and they said it was to do with my age and the cause was a trapped nerve. I was told I would need a small incision and a bandage.

Yesterday I went to my Docs. He was surprised to see me and said my last visit was in April. I told him I had three problems. He said, “Let’s start with number 1”. I told him about the colds, coughing and chesty barking over Christmas and it wouldn’t go away. I got 10 antibiotic tablets for that.

Number 2 was the thumb. He recognised the problem immediately and gave me a prescription to go to a neurologist around the corner. I did just that later and got an appointment in ….. guess how many weeks…..yes, seven weeks!

Problem 3 was cataracts on my eyes. This was diagnosed when I visited my optician in Silsden last August. My Doc gave me another prescription but warned that both local eye doctors were not taking on more patients. He suggested I call my health insurance office so they could find an eye doctor. I did just that and was told they would call me back when they had found someone. I’m still waiting for the call!

I’ve now removed all my Christmas cards. All done on the 6th January as per tradition. I also opened a present. This was from Ines and my Monday Gang. I decided to call him Angus. Yes, I know that also sounds traditional! Angus the Piper. I’m trying to teach him to play his bagpipes when I enter my flat. So far no luck. He just stares at me and strokes his long white beard. Perhaps he’ll start playing before I have treatment on my thumb in 7 weeks!