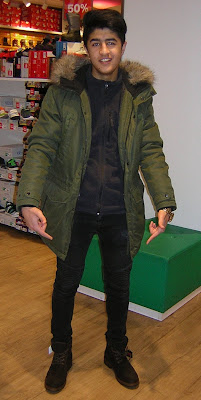 I remember a song from many years ago called, ‘These Boots are made for walking…..and I’m gonna walk all over you!’ I think the singer was Nancy Sinatra – daughter of a famous Papa!  If I am wrong please correct me. Just do this on the Comment section of each post. 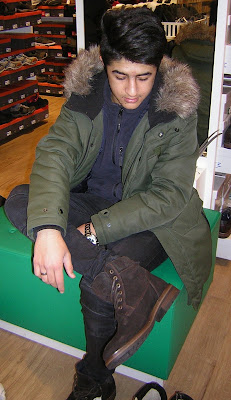 I noted that Bro1 had wet feet/socks. I asked why and was shown his shoes. Each had a large hole at the back of the sole. His brother and sister have winter boots, but he didn’t. I was surprised. Each Bro has a nice winter coat thanks to Ian and Birgit. I reported about this earlier. I never thought about his feet.

We did his paperwork and the the Bros left. I then opened my E-mails and saw one from Peter in Altlandsberg. This is a town in the countryside east of Berlin. He wrote that he had just sent some money to my account to buy things for The Family for Christmas. I was really surprised and wondered how on earth he knew that Bro1 needed good winter boots and how should I pay for them. What an interesting and strange coincidence.

I met Bro1 this morning at a shopping centre with three shoe shops. We found one offering  Sale Prices and boots he liked. He took his time trying on different models and settled on the ones you can see in  the photographs. When we left the shop we threw the old shoes into a recycling bin!

We now have a very happy Bro1 with dry feet! And with boots that German boys in his class will approve of.  It’s all part of the wider strange world of ‘integration’. In this case mixed up with teenage language and clothes!