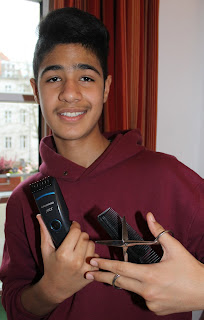 I had an unexpected haircut this afternoon. It all began when I met Bro2 during the week. He needed help to fill in a report about his Praktikum (job training) in a hairdressing salon in the north of Berlin. Lots of bureaucratic questions in bureaucratic German. We had to use translation pages on the internet to complete the first part of the form. 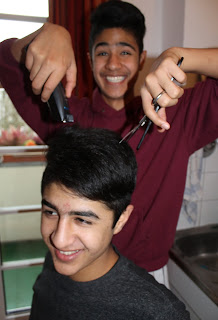 He came this morning to complete another part of the form. Having done that he said he would like to cut my hair. I was rather surprised and asked him what style. He answered in detail, which again surprised me. I realised he had learnt a lot during his training so I agreed.

He started slowly on the sides then the back. He said I should have a cut that clearly separated the sides from the top. I just smiled and said. “Do it”. He also thought I should have my hair shorter on top and combed to the front. I nodded again and ‘The Artist’ got on with his creation. 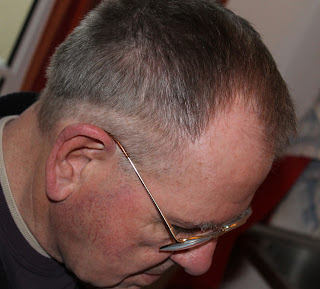 You can see the result in a photo. It was taken just after the cutting and before I showered and washed my hair, which changed the appearance a little. I think Bro2 has found a new occupation. He cuts his father and brother’s hair in addition to now perfecting his skills on my head. I would never have thought that he had such a skill even six months ago.

Then Bro1 arrived. He had finished his Sunday late-sleep-in and needed help to fill out a report about his Praktikum. His was in a small electrical engineering company. Lots of work on machines with different metals. He has to complete and give in his report by Wednesday. He left it very late to complete all the Blah, Blah. It took hours to complete most of the sections and often only with the help of a German – Persian translation website for he did not understand many German words.

I prepared a light lunch for the Boyz, including a fresh fruit salad which they enjoyed. After lunch I noted they started to ‘nod off’ as we tried to complete the reports. Given their age no surprise there, so I ordered them to go to sleep. They did so immediately. Meanwhile I looked through the forms and completed more questions. Even so, we still needed a few more hours work on Bro2’s documents.

Bro1 is coming to my place next Thursday afternoon to complete his forms. He has until 8th January to do that so less pressure. I wonder if he will want to snip a few stray hairs on my head. We’ll see!