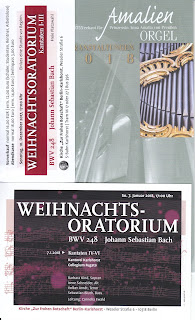 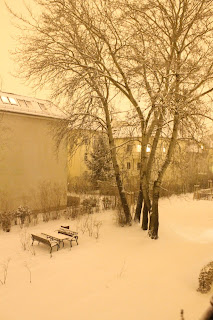 During Sunday night we had the first real snow of winter. Here is a photo of my garden covered in snow. I took it just before I went to bed. I had to make a number of changes to my camera settings before I could get a shot.

Earlier, I had been to a concert at the local protestant church. It is famous for its organ. It was made for the sister of Frederick the Great and attracts many people when there is an organ concert. Some are broadcast on the Berlin Classic Music station.

This time it was J.S.Bach BWV 248 Kantaten I-III. The performers were Kantorei Karlshorst, Berlin Sinfonietta and the Kinder – und Jugendchor Canzonetta Berlin. There were also 4 professional singers who sang the narrative text. A really wonderful event and sounds. The next concert will be on 7 January 2018 for Bach’s Kantaten IV-VI. I shall be there 🙂

The Friday before I went to another local church with Jutta. We heard a Christmas concert given by the Chor der Humboldt-Universität zu Berlin. This included songs in a number of languages, including English which they sang with such clarity you could hear every word. What a nice weekend of music I like. Hope you heard music that you like.