Yesterday I went to Willy-Brandt-Haus. I had been invited to attend a conference. It is the Head Office of the national SPD. The Berlin SPD has a separate building in another district to the north. It was an international conference with members and guests from a number of countries. There were also diplomats from various embassies in Berlin. 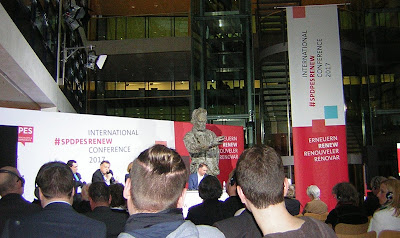 It started at 12.30 with welcome speeches before we got the opening speech from SPD Party Chairman Martin Schulz. We then moved into discussion 1. This was led by 5 speakers and a moderator. The theme was ‘Renewal of European Social Democracy. There has been a decline in support for Social Democratic parties across Europe and increase in right-wing populist parties. The debate focused on ways to reverse this decline.

There was a short break followed by a speech given by Sigmar Gabriel. He is the current Foreign Minister, Deputy Prime Minister and ex-Chairman of the SPD. After that we went into discussion 2. The theme was ‘Perspectives for progressive politics worldwide’. The panel included people from South America, Philippines, Macedonia and Norway. An interesting mixture.

I took this photo during the session. Not my best but I did not take my ‘best’ camera. I enjoyed listening to two speeches in Spanish and noting how many words I understood. Nice!