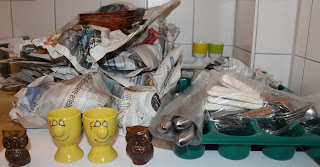 Hello Silsdeners and other readers. You know I, and a small group of people, have ‘adopted’ a refugee family. On my blog I refer to them as ‘The Family’ and I do not give their names. For example. the two boys in the family are called Bro1 and Bro2.

You also know that my good friend Oldie Hermann died recently and I went to his funeral. It is all on my blog. His family recently called me to say they were clearing out his flat and had collected a number of things that may be of use for The Family. They now live in a smaller refugee home but at least have two rooms and access to a kitchen and launderette.

I took the S-Bahn east to meet Hermann’s family. They picked me up at the station and we landed at their nice home and garden in time for late morning coffee. After that they showed me some of the items they had collected. I was surprised at the quantity. We went through the things and packed some into large bags for me to carry. 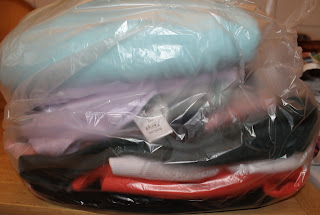 The main things were cutlery and plates of all kinds. You can see them hidden in the newspapers used to protect them on the journey to my place. I really like(d) the eggcups with faces. I had never seen them before in Oldie H’s kitchen. The kids will love them 🙂 I also packed a lot of autumn/winter woolen tops for women. A present from Oldie H’s daughter-in-law. You can see some in the photo. At least The Mother will enjoy having presents just for her.

We had lunch then decided I should return with The Father to sort out and pack what remained. There are lots of glasses, cooking pots and pans in addition to more clothes and towels. I called The Father and we are meeting on Saturday afternoon to pick up the rest of the presents. Perhaps The Boyz will be there to help carry the things.

I’ve had a nice week so far and the weekend also looks good. Hope things are fine with you at your end of the planet!