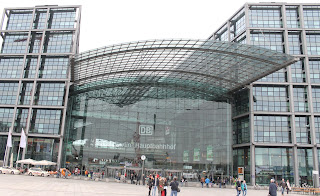 I write this blog for my Silsdeners who have not been to Berlin, so lets explore a bit of it. Last Saturday I went to Berlin Hauptbahnhof = Berlin Central Station. It was the meeting point for a group of walkers to explore the inner city area of what was the Berlin Wall.  I know the organiser, so I packed my camera/rucksack and set off.

Here is my photo of the Station taken from the south side. There is an open area for cars, buses, people and then a short walk away is the River Spree. You cross it via the new(ish) bridge and arrive on what was the West Berlin side of the river. Continue walking and you will arrive at the Kanzleramt. This is the office of the German Prime Minister. 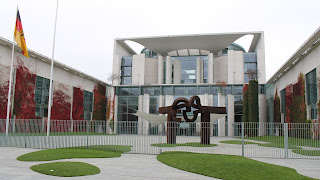 Walk along a bit more and then turn left. You will enter a large green area at the end of which is the German Parliament Building. If you return to the river there is a walk indicated by sign posts. There were a lot of people on the walkway as well as in front of the other buildings. Keep walking and you will arrive at the back of the Parliament. There is a memorial to those killed trying to cross to West Berlin for the Berlin Wall ran right at the back of the Parliament Building.

The Hauptbahnhof was built from 1995, and opened in May 2006. It was constructed on the site of Lehrter Bahnhof. This was opened in 1871 and provided a rail link north to Hanover and later to Hamburg. It was bombed and heavily damaged in WWII. It then served as an S-Bahn station and was the end station before waiting to cross into East Berlin.

Construction of the new Central Station started in 1995 when the underground tunnels were built. There was a problem of flooding so the engineers diverted the course of the nearby River Spree in 1996-98. Amazing! It has 7 platforms, 16 tracks and is the main north-south line. The east-west lines carry the city trains such as the S-Bahn. 1,800 trains a day stop at the station and there are 350,000 passengers a day. It has 5 levels, the lowest is 15 metres underground. The main concourse is supported by 2 towers and provides 44,000 sq. metres of commercial space.

It’s well worth a visit before you start the inner city walk where the Berlin Wall used to be. Just follow the signs.