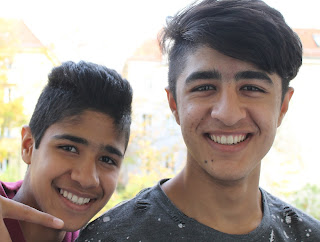 Since my last post I am still trying to come to terms with Oldie Hermann’s death. I was helped by a visit this afternoon. Bros 1 and 2 arrived seeking help and advice. Their youth, energy and questioning was a pleasure to experience and a needed contrast to the end of Hermann’s life.

Bro1 had called earlier asking for help and we agreed to meet this afternoon. He arrived with Bro 2 as a bonus!  Bro 2 was 15 last Friday so I gave him a card and some money from me and my Kowalke Gang. He was more than happy to get a card and present.  You can see it in the photo. 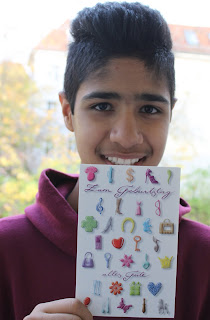 He said he needed help with his school English. That means he found an excuse to simply be there. Big Bro 1 was the one who needed help. Where the family now live, in a hotel used as a refugee home, there is no internet, TV or telephone connection. He came to me to use my connections.

He arrived well prepared and I immediately gave him a laptop and telephone. He is now in a college to prepare students to both study and work. He needed to contact a company offering a training programme. He wants to become an electrical engineer. He called all the companies on his list and got one positive reply.

We then wrote a letter of application and his CV, printed them out and put into an old fashioned envelope with a stamp to be posted to the company. Let’s see what happens. He then pulled out 6 pages of an exercise he had to do for his German class. It took a long time to go through it all and explain words, and what he had to do, but he managed it.

In between, I made sure the Bros had lots of water/juice to drink and also gave them a hot meal. In the breaks we had some interesting conversations. They confided in me about the discrimination they experience each day, mainly from other boys in their classes. I shall not go into detail but it was good to talk and I think it helped the Bros. to think about their reaction and responses.