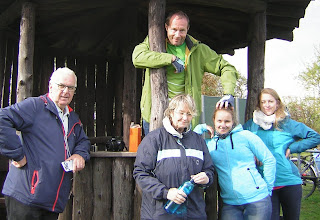 Yesterday was a public holiday. The 3rd October marks the union of East and West Germany all of 27 years ago. Traditionally I meet my Muggelsee Gang and we set off on bicycle tours around Berlin. Yesterday there were only six of us. Illness and family visits reduced the number of participants. See the photo of the other five. 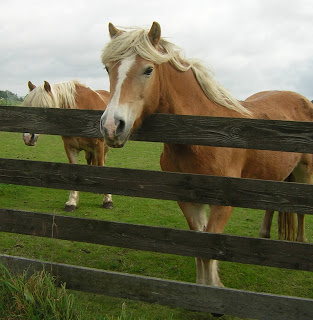 Uli is on the left and he organised the tour. Excellent choice and well planned. We were lucky with the weather and only had about 10 minutes of rain. Where did we go? Take out your map of Berlin and the surrounding federal state of Brandenburg. Finger in middle of the city and then move it to your right. Keep going in the direction of the Polish border to the east. 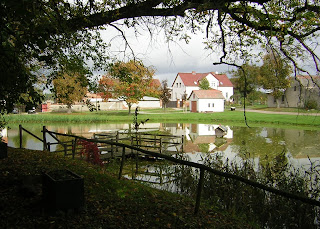 Go through Fürstenwalde and stay on the railway line. A few stops further and you will see a village called Briesen. This is where we disembarked and set off on a 33 km cycle tour heading north towards the town of Seelow. This took us through rolling fields, woods, villages, rivers, streams and lakes. I took a number of photos and here are a few to give you some idea of the area. 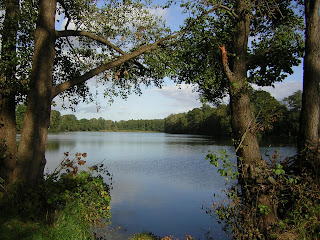 Stay on your map and go north to Alt Madlitz. There we visited the manor house in a country estate. Next was Falkenhagen near to a large nature reserve. There is an old church made of local stone, the Swiss House, named so because of the architecture. We stopped for a picnic there on the side of a small lake in the centre of the village.

Back on the bikes and further north. We stopped to stroke two horses before arriving in Lietzen-Nord. I discovered it was the centre of a huge underground bunker complex and military command centre. We cycled on and stopped in Neuentempel to see the church built by the Knights Templar, and the old ‘steam’ bakery. I think this means one that burned wood. Back on track we enjoyed the palace gardens in Diedersdorf before turning right and cycling to Seelow.

Seelow is now famous for the battle there in April 1945 when the Soviet Army succeeded in taking the area so enabling them to march to Berlin. There is a museum and a large statue of a Soviet soldier in addition to graveyards. I had been there before, but by car on a trip to Poland many years ago. It really is worth a visit.  From there we found our station and started the journey back to Berlin.

Thanks to Uli and Gang for making yesterday such a memorable day for me!