Sunday was a bad day for the SPD. It was the day when people voted in a General Election. The CDU/CSU lost votes and so did the SPD. In fact they got the lowest share of the national vote since 1948. The winners were the FDP, which is a pro-business liberal party, and most of all the AfD. 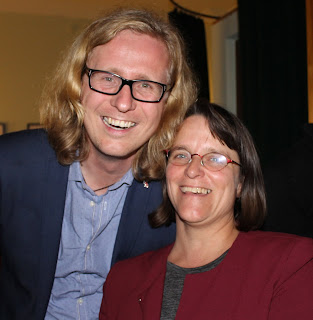 The AfD was founded in 2013 by some university professors of economics. Then the party was against the EU and economic policy to help the Greek government. It later changed to oppose refugee policy and moved to the political right.

On Sunday, the AfD got most of its votes from people from the ex-DDR and Bavaria. They will be the third largest party in the new parliament. The newspapers and TV political programmes are full of what that could mean. Watch this space!

I voted in the afternoon, had lunch, did some Spanish homework then got ready to go to a bar/restaurant for a meeting of SPD members to see the election results coming in. It was worse than I expected. Here you can see a photo of members looking at the screen showing the results. Not any smiles to see.

The other photo is of Kevin, the SPD candidate, with Anja, who was one of two members who organised his campaign in my area. They and ‘we’ all worked hard but with no success. We have a lot of work to do to learn from ‘The Bad Day’.