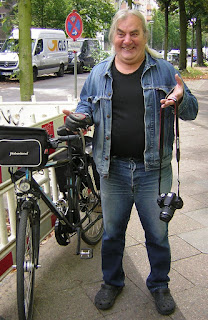 This means the cycle/walking tracks where the Berlin Wall used to be. You cannot find it/them where all the Wall was, but there is a very cycle friendly track in the south of what was West Berlin. I cycled along it with Imre today.  The journey covered over 40 klm which includes the klms we cycled from his flat in the ex-East Berlin to pick up the Mauerweg and follow it in the ex-West part of the city. 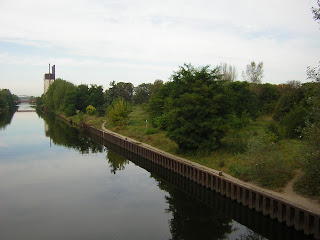 I cycled the 30 minutes you need to get to his place. He was waiting for me with one of his 3 bikes. I commented on that and with a big smile he told me he also had 3 TVs before showing me 2 of the 5 cameras he has. At that point I gave up about the number of things he has! With my mouth closed we set off.

Not far from his place is a canal and on one side there was part of the Berlin Wall. You can see it in this photo. It is rather strange to be cycling along a specially made track where before 1990, you could not have gone. A number of people tried to cross the Wall but with no success. They were shot by border guards. As you cycle along the track you will see memorials to those at the points where they tried to escape and were shot. Here is one in this photo. 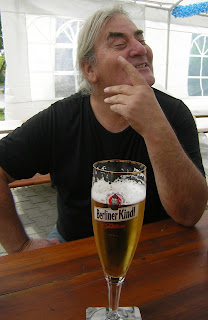 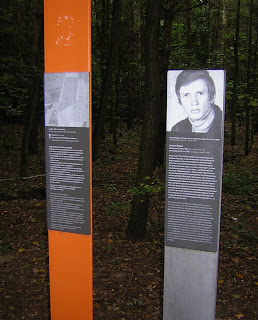 We cycled on and suddenly found a pub/restaurant preparing for a ‘Bayern’ Festival this evening. We decided to have a rest. Imre ordered a ‘Wildschwein Wurst’ (a wild pig sausage) with mustard and bread. I ordered a local beer. Imre does not drink alcohol but agreed to be photographed with a beer in front of him. Of course, it was mine!

After that break we hit the road again. We cycled through very nice woods and fields. It really is worth seeing and travelling along the rural part of the Mauerweg. Pity that most tourists to Berlin do not do so. The most they do is visit Checkpoint Charlie in the centre of the city.

Later we had a proper break at an Italian restaurant recommended by a local lady. Very tasty and at a reasonable price. I ordered a pasta dish with small pieces of meat and a local mushroom now in season. Mmmmhh very tasty and with a glass of Italian red wine it tasted even better!

We cycled on and noted the change in weather. We headed for the nearest S-Bahn station and the slow return home. Imre made it before the skies opened but I had further to cycle and arrived home very wet. No matter, even the rain could not spoil the interesting journey and discovering a part of Berlin that we had not seen before.