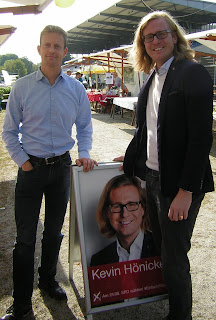 My last post was a week ago. How time flies. I’ve had a very mixed week with most of it good. In my last post I said I would be going to our local racing track area for a day dedicated to families. My local SPD was also there and set up a table with election information. The election is this Sunday. 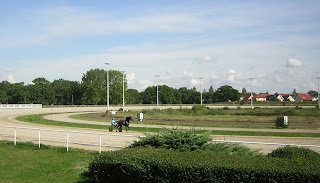 I was on duty at 10.00 am and took over a machine that I shall have to describe. It is circular and you can spin it. It has numbers like a clock but at three points it has the words SPD in red. There were lots of things for children such as pens, coloured pencils and lots of lollipops and sweets.

As usual, I cheated to make sure each child took away three prizes from three tries to win. They didn’t notice that I slowed down, then stopped, the revolving game as the pointer came to one of the red SPD markers. You cannot believe how happy the kids were and their parents also smiled a lot. A few of them noticed I was cheating, but smiled and said nothing to their children! 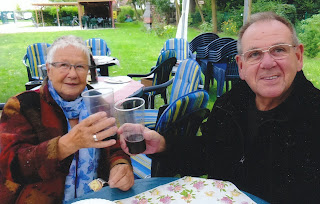 Other members answered questions and entered into discussions about SPD policy with members of the public, while I continued to make the kids smile. One was Gregor, who is the Chairperson of our local SPD branch and the other is Kevin who is the SPD candidate for my borough to be elected to Parliament on Sunday. Here is a photo of them.

I mentioned that we were in our local  racecourse for horses. In the afternoon the horses and riders appeared to entertain the children and parents. Here is a photo of the area with just one horse. It was in the warm-up period!  I really enjoyed my time there and still think about the happy faces of the children as they won three prizes!!

From there I cycled to the local Protestant Church.  One of my neighbours sings in the choir and I had promised to go the their concert that afternoon. It was nice to relax in the cool of the hall and enjoy the sounds. The concert was well attended by local people including young families with children. The evening before I went to a local SPD Fest to meet other members and enjoy a barbeque and drinks. Here you can see me with a very nice special lady :-))