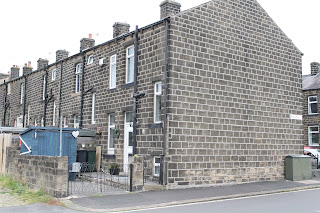 I decided to include Hothfield Street in posts about my recent holiday in Silsden. It is an area of terraced houses all looking the same. Owners displayed their individuality by flowers, hedges, bushes in the front garden and the colour of curtains behind the windows. 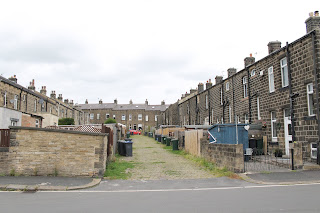 The first photo is of a house at the end of a terraced row. I was born there! In those days it was common for births at home. After the NHS was created women increasingly went into hospital to give birth. You can see other pics of the house in the photos running down the left-hand side of my blog. 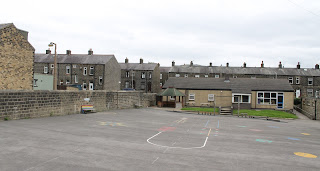 In the ‘back yard’ we had a coal shed next to an outdoor toilet. There was also a small shed with a workbench and tools, mainly for repairing bicycles. In the photo these are gone. The toilet used an old technology called a ‘tipple toilet’. It was not a water toilet. In the 1950’s, my parents had a bathroom with toilet built in the house. Part of the main bedroom was used for this piece of modernisation! 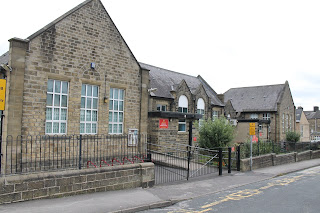 The second shot is of the ‘back street’. I can remember women chatting to each other over the garden walls and hanging out the washing in the yards. A few people had cars parked closely to the walls so other cars could squeeze past. Next to our house is one of two local schools. In my day it was called Silsden Secondary Modern School.

It educated kids like me who had failed the 11 plus exam. Those who passed went to the Grammar School in Keighley. Not far away was Silsden Junior School. All the kids went there including those from local villages. I remember having separate English Grammar and English Literature classes there and enjoying them. It is now a Nursery School.

Here are two shots of the Secondary School, which is now a Junior School. You can see my family house next to the school in one shot.The second shows the front of the school with a small garden. It always seems strange walking around that area with so many dim and distant memories.