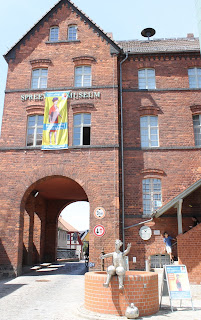 Welcome to new readers in Brazil, Portugal, Ukraine and Chile. Now get out your maps of Berlin and area to help you with this post. Last Tuesday I went to Lübbenau. I can hear you asking ‘Where?’. Put your Berlin area map next to your computer and one finger on the centre of Berlin. 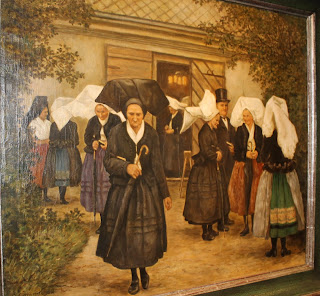 Move it slowly to the south east of Berlin, continue into the Federal State of Brandenburg and keep in a south east direction. You should find an area called Spreewald. In the middle is the town of Lübbenau which is home to about 18 thousand people. It is 85 km from Berlin and you can reach it by three different train service or a regional highway.

There is evidence of a settlement there by Slavic speaking people from the 8th century. Germanic  speaking tribes slowly moved into the area hundreds of years later and recorded what was then a small fortress as Burg (castle) Lubenowe in 1301. Local people still speak Sorbisch, which is a  ‘niedersorbischer (wendischer Sprache) language. They have their own style of dress which they like to show at festivals and other special occasions. See the painting. 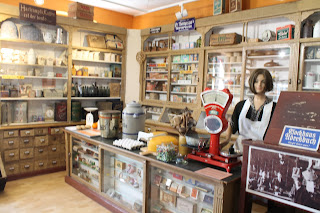 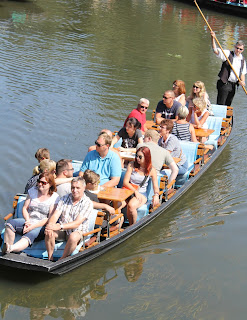 This is in addition to lots of local history which you will find in a museum – see the photo – which was built as part of a gate-house in 1850. It has sets of exhibitions showing how people lived. See the shop photo as an example. Others include a bakery, butchers, clothes shop, shoe makers in addition to two old trains in the basement. Certainly worth a visit when you are next in the Berlin area.

I went there with my SPD Oldies. It was my second visit with them. We set off from Berlin in three cars and our first stop was the museum. We were all impressed as I am sure you will be. We then moved into a restaurant specialising in local fish dishes. Very tasty, and I washed mine down with a glass of Radeburger beer. Well it was a hot day!

We then went to the harbour to see the traditional boats – flat bottomed punts – taking tourist off to see the area from the water. We also took the opportunity to have Kaffee und Kuchen – no surprise there – before making the return journey. Looking forward to my next visit.