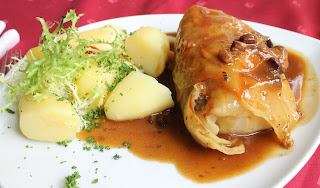 It’s lunchtime here. The Kowalke Gang should have had breakfast in my garden this morning but recent rain, and the arrival of the gardeners and machines, stopped that. We are meeting for Abendbrot this evening. Some of the gardeners are now sitting at the table and tucking into lunch.

In German you say Guten Appetit to friends when you start a meal. In French you say Bon appetit and in the UK people now say ‘Enjoy your meal’. This takes me back to lunch in Buckow – see my last post. I also thought it might be informative for my Silsdeners! 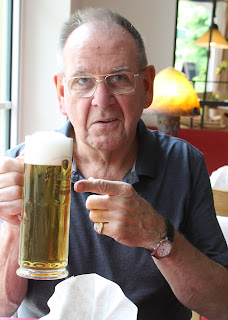 Imre and I arrived in Buckow last Sunday and found his favourite restaurant next to a stream and water wheel.  No room in the garden so we settled into the restaurant and the waiter brought the menu. The restaurant offered ‘traditional’ German dishes which I really like.

They are simple but solid meals such as the one I ordered. It is called Kohlroulade which means stuffed cabbage. Kohlblätter means cabbage leaves and they are wrapped around a piece of minced meat (with seasoning) which forms a filling. It is served with potatoes and gravy. That is it – simple and very tasty!

I washed it down with a half-litre of Radeberger Pils, one of my favourite German beers. It is based on the Czech brewing tradition in an area called Pilsner, hence the short form ‘Pils’ . Radeberg is a town near the border to Poland and The Czech Republic. Drinking good beer knows no borders and so in 1872 a brewery was founded in Radeberg by a certain Gustav Philipp. The rest is history!

It is now sold in 87 countries in all continents of the globe. In Germany there is a law from the Middle Ages which does not allow any chemicals to be added to beer for home consumption. This is not the case for export beer. The Radeberger I like and drink is just made from water and hops. Try a simple traditional dish for lunch and a good beer the next time you visit Germany. Prost!!