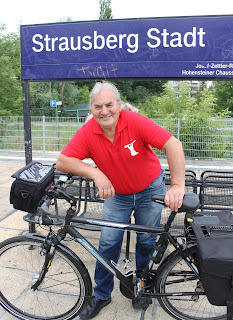 Yes, from the title you know I went to Buckow last Sunday. It was Imre’s wish. Regular readers of my blog will know who Imre is. He called me to say the weather looked good for that day and would I go with him to Buckow. I immediately said yes. 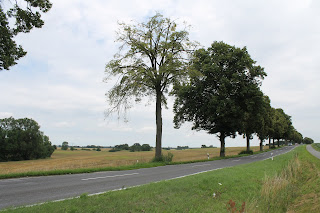 He arrived on the latest of his three bicycles and a large bag of fresh strawberries. In my kitchen he cut them up, added sugar and Mmmmddddd his way through the bowl. So refreshed, off we set for Buckow.

If you have a map of the Berlin area then put your finger on the centre and move it to your right in a straight line. It will take you into the eastern districts of the city and then out into the rural areas and villages of Brandenburg. If you continue you will eventually come to the Polish border. 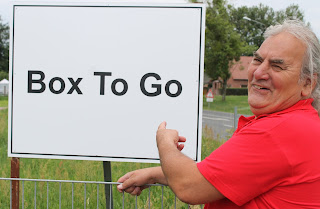 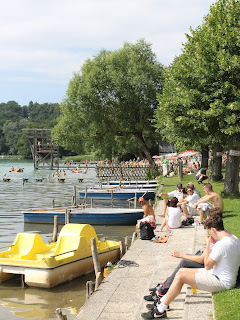 On the way you will arrive at Strausberg. There are three S-Bahn stations so get out at No.2. As you can see from the photo, Imre and I did just that. From there it was 16 klm on our bicycles to our destination. Imre really likes the landscapes. He says they remind him of the area where he was born in the south of Hungary.

On the way out of Strausberg, Imre suddenly burst out laughing and wobbled on his bike. I thought he was going to fall over. We had arrived at a Vietnamese Restaurant with this classic example of Denglish. Instead of ‘Coffee to go’ we saw a sign for ‘Box to go’. What on earth does that mean? I thought that perhaps I could buy one to put my brain in ….. to go!! Where is this language rubbish going to?

As we pedaled further, he stopped to take photos of the landscape. He brought three of his four cameras for this task! I wondered what else he had in his bicycle bags and later discovered there were three bottles of fruit juice and plastic cups.

We finally got to Buckow, had lunch and walked around the small town. He took more photos and then on the way back we stopped at the beach area. Here you can see that many other people had the idea to visit Buckow and enjoy the sun and water. A very interesting day and one with lots of laughs.