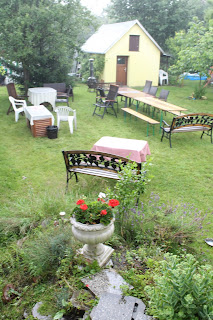 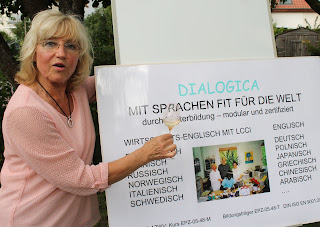 Last Friday I went to a special party. I cycled to the main road, turned left and continued to cycle. I arrived at an S-Bahn station, turned right and later right again. I arrived at the very nice home of our hosts. They were Inge and Micha. Why the meeting? 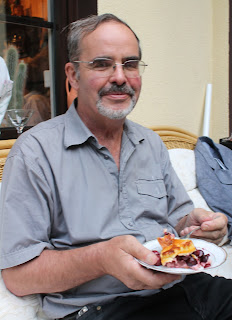 It was the 20th anniversary of their founding a language school called Dialogica. Yes, it happened in 1997. Birgit  Gast started teaching there and told me about the school. It was then on Ku-damm in a nice area and easy to reach by public transport. Birgit told I & M about me, I had an interview and started teaching there. 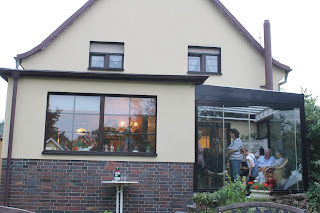 What an interesting time it was with wonderful memories. I also liked meeting teachers of other languages. Very multi-cultural and multi-language. Most of my teaching was preparing students for the London Chamber of Commerce and Industry examination. Lots of success and the school and I got a good report in an evaluation about our work.

This all came flooding back as I arrived and greeted our hosts and other guests. Unfortunately, the clouds gathered as we settled into the garden and then we had to flee indoors to escape the rain. Even so, grilling continued, glasses were refilled and lots of catching up on news took place.

I noted that we all looked a little older but the vitality of the group was the same as ever. Here are photos of our hosts and of the house and garden. Looking forward to the next gathering. Thanks I & M for a very special evening and party.