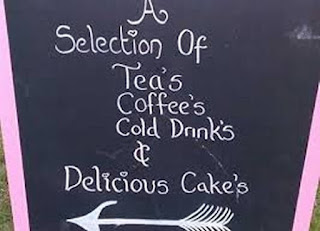 Following my last post about current use of English, I found these two images. A lot of native English speakers do not know how to use the apostrophe. You will also find it being used incorrectly all over Germany. The first image is an example. 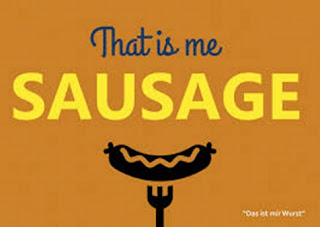 The second image shows the dangers of translating things word for word. In the bottom corner you can read the German words ‘Es ist mir wurst’. This usually translates as I don’t give a damn or I couldn’t care less and not the words in the joke!

Yesterday I heard more ‘modern’ English on BBC Radio 4. I notice that on the island there is no future, only ‘going forward’. ‘To have concerns’ has killed the structure ‘to be concerned’. There are no longer any problems there are only issues. The Brits are now busy ‘growing the economy’. I wonder if they are using fertilizer on this new plant!

I also heard some people say, ‘to land a job’ –  in my day you landed a fish! Another said, ‘have agency over your life’ and,’big footsteps to follow:’ and ‘we have to roll up a deficit’. In the UK windows still have opportunities but I can’t find any hanging on my windows in Berlin. ‘To deliver on something’ is everywhere as is ‘it’s sort of….ehhhh’ and.’I’m like errrrrr’. ‘Absolutely’ is now the first word in communication and is threatening to replace ‘Well….errr’.

Did you see Germany win the football competition yesterday? I hope the team is not having concerns about going forward to grow the game but will absolutely leave big footsteps to follow if not issues in engaging with people/fans and will not have any problems to land a job. Na, prost!!