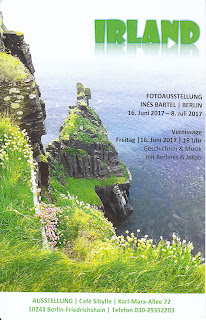 I went to a Vernissage last Friday. It was given by a hobby photographer called Ines Bartel. She is a member of my Monday ‘Relax with English’ group. She works as a librarian and specializes in creating and preparing exhibitions in libraries and other public buildings. This time she was the performer.

She was recently in Ireland and took her camera along. The topic of the evening was Ireland based on her photos and experiences of travelling through the island and meeting lots of interesting people. Here you can see the invitation and Ines talking to her public about her interesting experiences there.

Music was provided by a singer and guitar player called Jakob. I was surprised to hear him sing in English with an Irish accent then introduce his next song in German. I later spoke to him and asked him if he was Irish or German. The latter, he told me, but with great interest in the former including learning how to sing with an Irish accent.

The event was held in Cafe Sibylle on  Karl-Marx-Allee. My first time there and I liked the relaxed atmosphere  permanent display of household things from DDR times. Well worth a visit when you are next in Berlin. It is only a couple of underground stops from Alexander Platz.

It was actually my second Vernissage for I went to one last Thursday afternoon at my local AWO Centre. We toasted the artist Veronika Ban with glasses of sparkling wine as we admired the exhibition of her paintings. It was a very ‘milti-kulti’ event with guests from a number of countries. I noted 8 languages in use. Nice!