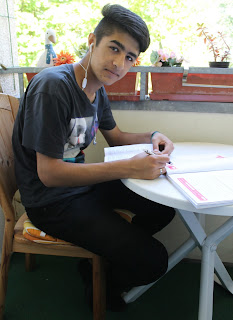 ‘The Boyz’ called on Saturday to ask for help with English homework. I told them to come round on Sunday afternoon. On Saturday I was at a special SPD meeting. 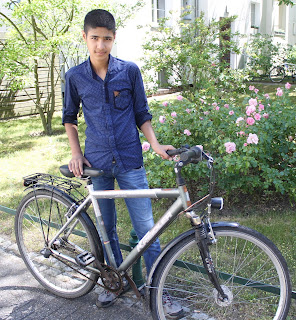 It was about how to talk to the public when you knock on doors or have an info centre in the street or car park. It was very interesting but I noted I shall have to quickly learn more German vocabulary for such tasks.

Sunday afternoon came and the bell rang. The Boyz wanted me to see Boy2’s new bike. Here is a shot. There is a bike repair shop in the home where they live. He had taken his too small for him now bike there and got a replacement appropriate to his increasing height.

Bro1 settled onto the balcony and opened his grammar exercise book. Of course he put on his head phones and listed to hip hop music in Persian. Yes, there is such a thing! Interesting that he can do English homework while listening to another language.

Bro2 started English at his school two weeks ago. I have books for A1 beginners so he settled down at the kitchen table and opened the book. The lessons are in German and English so from the former he was able to understand what he had to do in the target language. And so the clock ticked away and evening came.

They left to meet friends at the home where they live. They had agreed to form two teams and play football. While they were doing that I turned on my TV and watched Germany play the Czech Republic in the Under 21 European Football Competition. Germany won 2:0. :-)) I wonder if The Boyz’s team won!